Fred woke up exhausted today. He was asleep on the couch when I got up around 7:30am and was groggy all morning after that. He didn’t know why he felt so crappy, but I knew. He had totally forgotten that he spent an hour the night before engaged in an empassioned debate. His energy tank just doesn’t replenish like it used to.We had thought about staying one more day to go visit Matt Miscione at work today, but his work location turned out to be a closed set. So we couldn’t visit. (P.S. sorry Miscione family for spelling your name wrong yesterday!😊)So we decided to start heading home. We got all packed up and drove around to the front of the park to hook up the Jeep. When we went to grab all the towing equipment, we were missing on of the tow bar pins. 😵 We must have left one on the Jeep bumper in our haste to get to In and Out the first day we arrived in Castaic.

I walked back to our site to see if we were lucky enough to have dropped the pin at camp. But nope… not so lucky. That baby probably rode on the bumper of the Jeep until we hit the freeway and then bounced off.I went to the RV park’s camp store to see if they carried 7/8 inch pins. No luck there either. All they had were thin trailer hitch pins.

Our pin was custom made by the bumper manufacturer to work with the Blue Ox Tow Bar we use. So Fred had little faith that we would find one in a store. If we couldn’t find one, we would have to drive the RV and Jeep back separately, and that would suck!We re-parked the RV at our site because checkout time was not until noon and it was only 10:30am. We sped down to the Camping World in Valencia to check for a replacement pin. 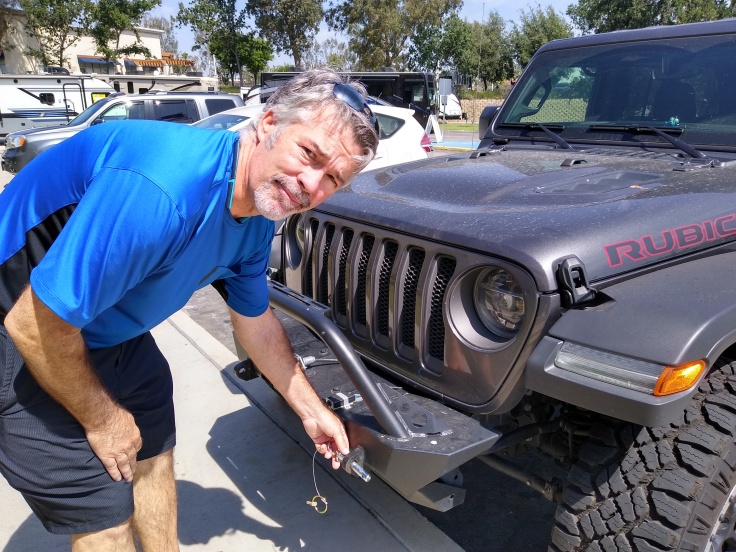 They had a 3/4 inch pin… which was too skinny, but it would work if needed. The technician at Camping World told us about a trailer hitch guy named Sol about 20 minutes away. He said Sol might have it because he sold Blue Ox equipment. 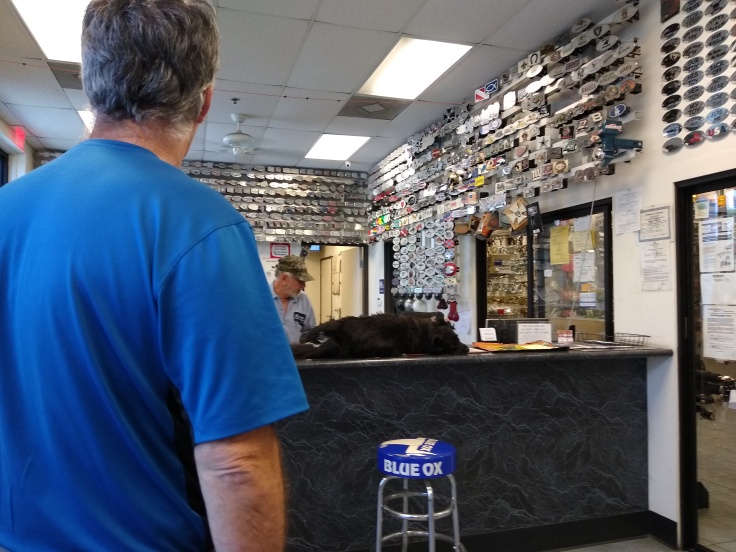 We still had an hour so we drove over to Sol’s place. We were in luck! Sol did have everything, and $20 later, we were all set. Sol’s shop was cluttered and his dog took up most of the counter space. But it was quite the place to visit and worth a drive if you ever need specialized hitch stuff… Or just a set of giant dangling nuts for your truck. (Everytime I see those on a truck, I always want to snip them off. I don’t know why.)We had enough time left to grab lunch on the way back to the park. I used the Chick-Fil-A app to order some sandwiches from the place where we ate yesterday. The app worked great. We grabbed our food and made back to the park by 11:45am.

By then, Fred was just exhausted from the morning stress. We decided to stay one more night and start fresh tomorrow.Our current site was already rented so we had to move to another site. Fred was able to back the RV up the road, all the way to our new spot.

I doubted he could do it without a spotter, but he pulled it off. I hooked up our power to have A/C and we ate lunch. Fred took a little victory nap afterwards. I finished setting up the RV and did some blogging.By about 2pm, Fred was awake and wanted to go get the Jeep washed. But he ultimately decided another nap sounded better. He moved to the couch and napped there.I caught up on the blog, went for a walk, and did some reading. It was too hot outside to workout. Maybe we’ll go out for dinner later, but

I was guessing it would be a Top Ramon and a movie kind of night. But Fred’s friend Michelle Fink Esposito had contacted him this morning about the local retiree’s breakfast. Fred didn’t feel well enough to go to breakfast with them this morning so Michelle dropped by this evening for a visit.

Fred and Michelle worked together in the Newhall CHP Office. They were both officers on the graveyard crew for probably 6 or 7 years. (David Moeller was part of that same notorious crew.)

Michelle’s visit really lifted Fred’s spirits. He was feeling kind of low before her visit, feeling like he had wasted the entire day resting. But when Michelle was here, he was energized and had fun. I would say it saved the day and really shifted his outlook back to a positive place. So thank you Michelle for visiting today! 🤗❤️

After Michelle left, we cleaned out the refrigerator and made dinner. We had some leftover tacos that David brought on Tuesday night and some leftover hamburger from dinner with Alissa yesterday. It was all still pretty good. We topped it off with some chocolate chip cookies 😁

With full bellies, we settled in to watch some Stanley Cup Hockey… The Bruins lost, dang it! We changed the channel over to a litte Celebrity Family Fued with Steve Harvey to brighten up the mood. It was Steph Current vs Chris Paul and it did the trick.