Friday: June 7, 2019:We had seriously considered driving all the way back to Sacramento today. Google mapped the trip at 357 miles or 5 hours 19 minutes. So in RV time, that meant about 7 to 8 hours of driving, depending on naps. Which under normal circumstances would be unpleasant but possible.

Fred and I both knew it would kick his butt and he was soooo reluctant to even consider letting me drive any portion of it. (So not true, I love to drive and she doesn’t)

Every now and then, Manduca gives good advice. And sometimes Fred will actually listen to him.

David Moeller stopped by after breakfast to squeeze in one last visit before we left. He hung out until we were ready to pull out of the park. He snapped a photo of us with his vintage Hasselblad 501cm camera. He still shoots on film.

We hit the road about 10:25am. Everywhere we go in Southern CA brings back so many memories for Fred.

We fueled up the RV at a Pilot gas station where Fred attended it’s grand opening back in 1997. He remembered towing the roll over simulator to the event with his MRE patrol truck. He got there early that day so he could wash and wax his truck before the event started.

As we climbed the “5 Mile,” (the portion of I-5 that’s 5 miles long at a super steep 6% grade into the Castaic area) Fred remembered going to a call of a wrong way driver.

Fred was responding the call in his Mustang patrol car, driving fast as usual. As he rounded a blind corner of the freeway, the wrong way driver came right at him. This driver was in a pickup truck hauling a trailer. When Fred eventually caught him, this driver was not even drunk, like the usual wrong way drivers.

This driver was driving wrong way on purpose because the Lamborghini he had been towing on his trailer had fallen off somewhere along that route and he thought retracing his path was the fastest way to find it.

That idiot went to jail! Seems like every road we drove and corner we passed had a story like that. Fred did so much good out here and had so many crazy adventures. He is so full of memories. I’m so blessed that I was able to retrace his steps along this trip and learn about his amazing life.

This “5-mile” was so dang slow!! We were restricted to the two right lanes. We crawled up the hill at 35MPH behind big rigs with their hazard lights on. It was aggravating.

Going down the hill was even more aggravating though because it was so loud! The engine braking was deafening.

Fred tried talking to his mom on his Bluetooth while we were driving this portion. It didn’t workout so well. It was way too loud. We stopped for lunch at Habit Burger in Wheeler Ridge around 11:30am.

We parked the RV down the road at the Carl’s Jr and I walked over to the Habit while Fred finished up his phone call with his mom.

Sadly, I didn’t check the order before I walked all the way back. The burgers were cold and one was so slathered with mayo that I had to scrape the bun clean with knife and blot it dry with a paper towel. It was gross!! I always order them plain for that very reason! So lunch was disappointing 😣 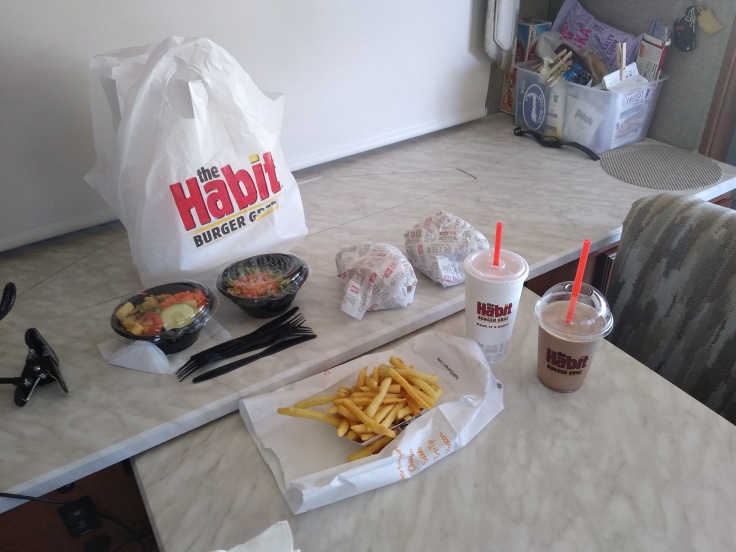 We made one more stop about 3 hours later at a freeway rest stop in Firebaugh so Fred could use the bathroom. Other than that, it was all driving, all day. Fred was like a cyborg on a mission.

We pulled into the Los Banos KOA around 4:30pm and set everything up really quick. The new tailer hitch pin we bought yesterday worked great today.

Fred took a little nap and I did some RV yoga. I would have set up the TRX today, but it was so windy & dusty outside. I stayed hunkered down inside with the A/C blasting.

We drove into Los Banos around 7pm and picked up Blaze Pizza. We brought it back to the RV and watched the NBA playoff game. Dinner was so good.

I love Blaze Pizza. I added Italian meatballs to the Vine Pizza. I think that is my new favorite. The sauce sets off my allergies but it’s just worth it some days. 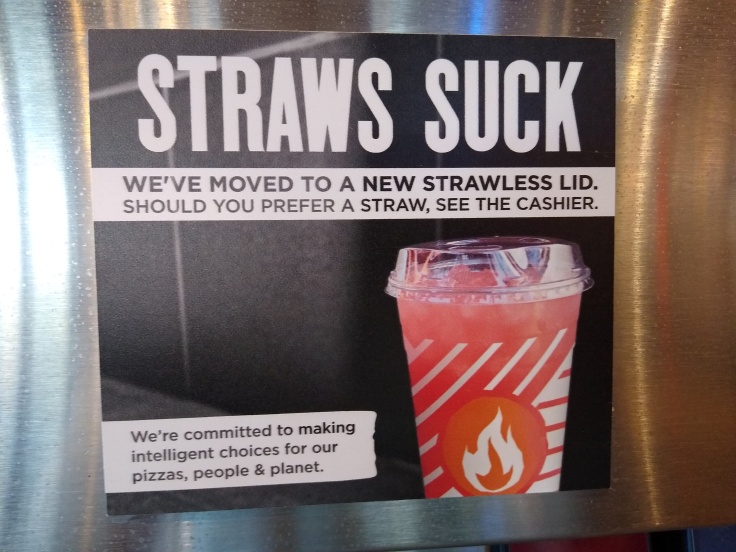 We topped it off with some Pepperidge Farm Chocolate Chip Cookies. It was the perfect treat for a good days drive. I have to thank Jacqui Oakes for the new cookie addiction. ❤️

This campsite was pretty cool. It had a fenced patio, BBQ, and fire pit. We were just too tired to use it!😩 It was a relaxing place to spend our last night on the road.

Tomorrow will be a short drive into Sacramento. We have about 123 miles left, which might be 2.5 hours for us. So if we leave Los Banos by 11am, we should be home by 1:30-ish. Bitter sweet for sure!

One thought on “Day 65: Last Night on the Road”