We have been doing pretty good to get up early-ish even though we keep changing time zones and losing an hour every few days. This morning we were in Central Time (+2 from CA time) and still got up at 7:45am, without an alarm clock. It is much easier for Fred to get up early. He is just built that way. Me, not so much.

We had to refil the propane again this morning but we were still on the road by 10:15am. Today was hard to hit our travel groove. We found ourselves stopping for gas about 11:45am. It was a slow morning. We certainly enjoyed the Missouri scenary though. Beautiful!

We stopped again for lunch about 30 minutes later, White Castle Burgers in Wentzville, MO. We were excited to try them as we have heard so much about them. We ordered a “sharing meal combo” that came with a 10 stack of sliders, 2 fries, 2 drinks.

I don’t know what I was expecting, but these soggy buns and onion soaked mini-meats wasn’t it. After the 1st bite we wanted to throw them away. But the restaurant was full of what looked like very loyal customers who watched us sit down with our giant tray. I didn’t want to start a riot. Fred slathered mustard on his 2nd one and said it was a little better. I put all my mini-meat patties on one bun. We didn’t finish them. It was just gross and we immediately regretted eating them. We were especially disgusted after each and every stinky onion burp for the rest of the day. They are definitely on the “Bubble-Gut Watchlist” from now on. 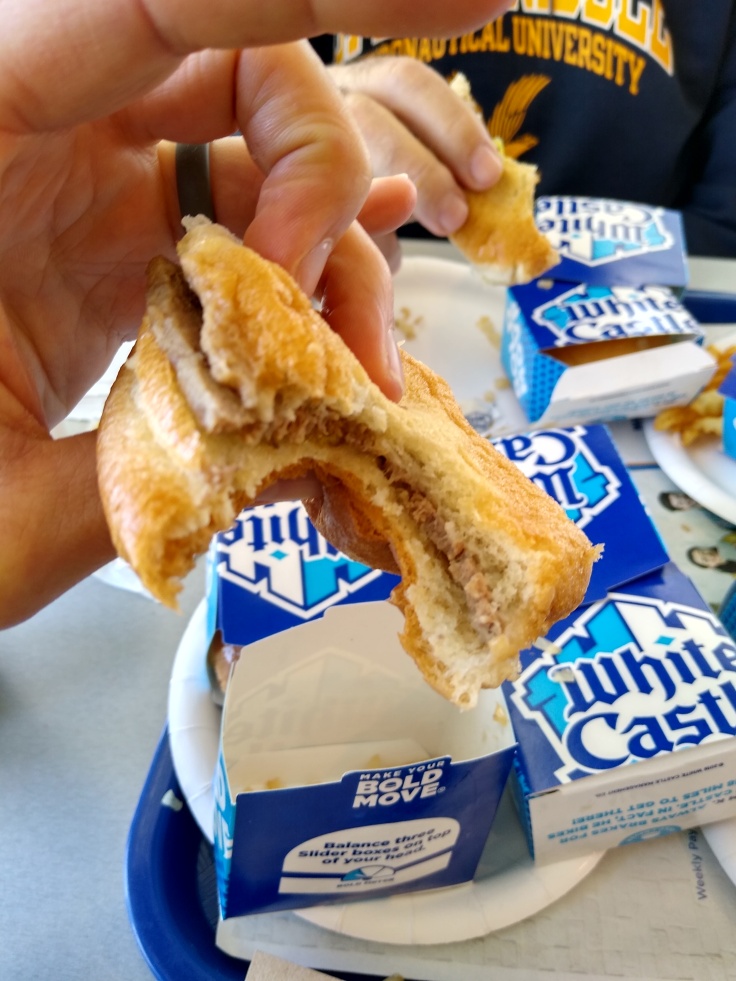 After lunch we found a Bank of America nearby (They are oddly hard to find on a road trip) & then hit the grocery store for some bananas and apples.

The grocery store made you pay a quarter to use a shopping cart. You got it back when you returned the cart. I guess this deters theft? If I was a bum, I’d pay a quarter for a set of wheels to keep all my earthly possessions safe.

It seemed like we messed around all morning and didn’t drive at all. That made the afternoon drive to our goal destination in Indiana seem rediculously long and slow.

And we hit what must be the bumpiest stretch of road in American just outside Effingham. I don’t know how the RV has any screws left in it. It was like riding a jack hammer for about 3 slow miles. I cussed a lot! The RV is loud enough itself and then you add that. It was almost unbearable.

It’s funny because a few miles later we passed an enormous white cross … Like Eiffel Tower enormous. And I felt a bad for blowing my top over bumpy roads. I Googled the cross. It’s 198 feet tall, 113 feet wide, forged out of over 180 tons of steel anchored in cement, and can withstand winds hurled by evilest of forces at up to 145 mph. So I felt pretty petty and extremely in awe.

We pulled into our camp for the night around 5pm. Once we hit the Illinois boarder we crossed another time zone so it was really only 4pm for us when we stopped at the Terre Haute KOA. They have go-karts and mini donkeys! Can you say Mario Kart! 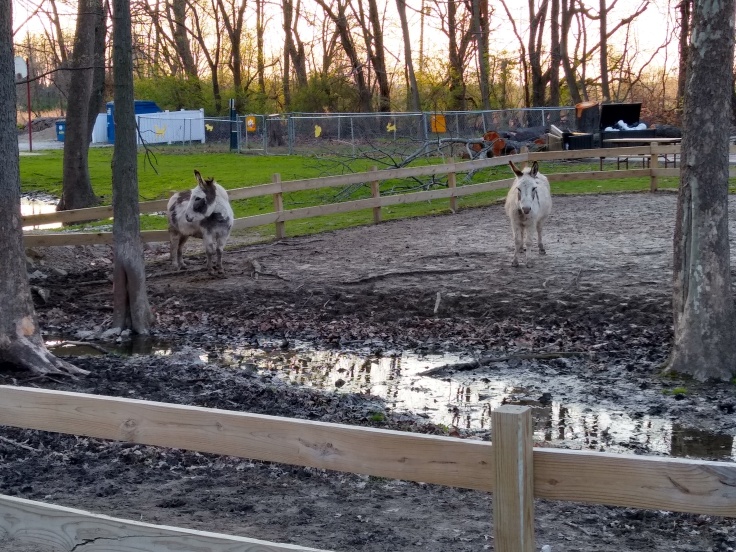 But the 1st order of business after setting up camp…washing the Jeep of course. This last week (since the snow incident) is the longest by far Fred’s Jeep has been dirty.

Then we hit Chick-fil-A for dinner. 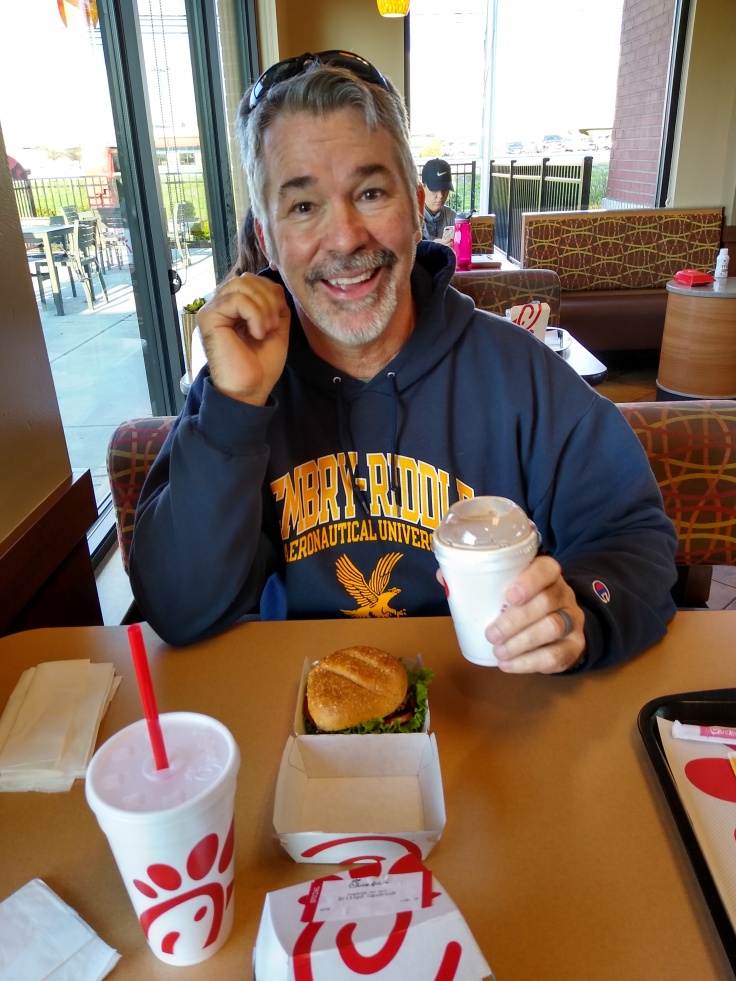 Fred has never been inside a Chick-fil-A before. The cashier got a chuckle out of that. So he treated himself to a chocolate milkshake to celebrate. I dipped my fries in it…so good!

And bonus, Fred had left over ketchup in his pocket when we got back. Which is great because we don’t have any in the RV 🙂 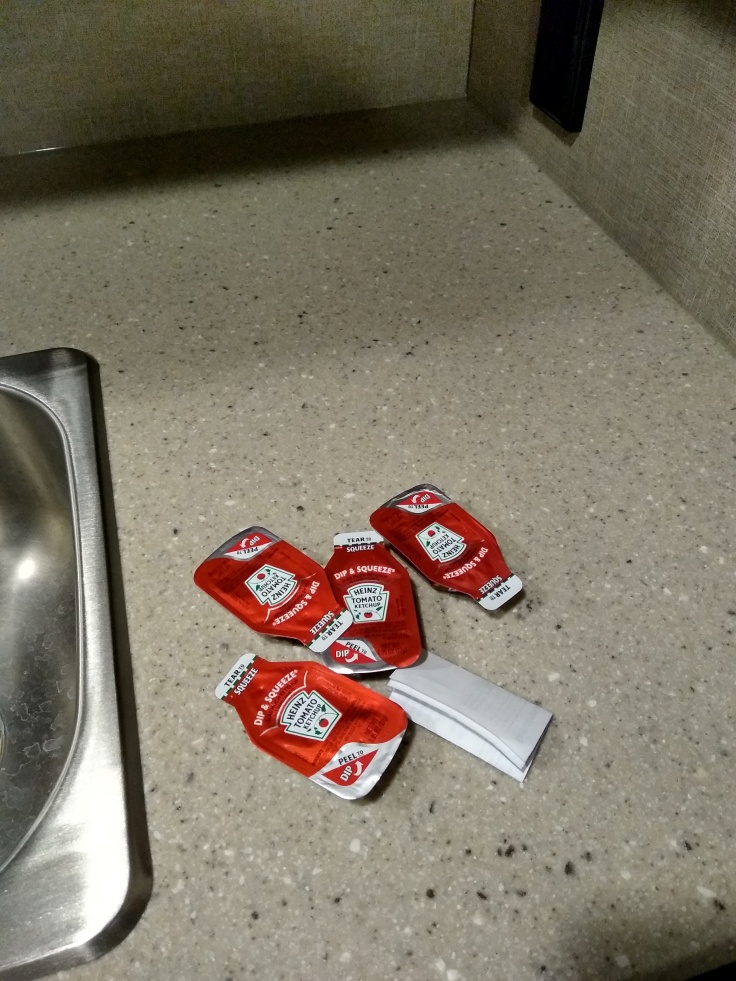