We stayed up late last night hanging out with David. I slept well and didn’t wake up until 7:30am. Fred however, was already up long before that, sitting in the living room watching “Leave it to Beaver.” He was eager to get going and make the drive to our next RV park in Castaic, CA to see Alissa and Ava.

To save some time making breakfast and doing dishes, we microwaved some Costco muffins instead of having our usual oatmeal. We shaved some more time off the morning prep by showering in the park bathrooms.

They were actually pretty nice showers once we found them. Once we entered the inner sanctum of the spa area, we found the pool, the card room, a dining room, a workout room, 3 hot spring mineral jacuzzis, a sauna, and the showers. I had no idea all that stuff was at this park. From the outside, it just looks like a barren sand lot with a few scattered RVs.

Fred joked that he was going to shower outside in the poolside shower.

We packed up as quick as we could after our showers to head to the Valencia Travel Village. We would have been on the road by 10am, but when I set up the Jeep with the RVi brake, I failed to put the Jeep’s transfer case completely into neutral. The gear shifter showed it was in neutral, but when we went to drive away, the Jeep did not roll with us. So that slowed us down a good 15 minutes while we fixed that.

It was only going to be a 2 and 1/2 hour drive so you are eager to get it done quickly.

As as we entered the LA area, Fred began to reminisce about his old patrol days, and all the fun he had working a beat. He talked about all the pursuits and near misses, and the epic shenanigans that passed the down-time.

He pointed out all the mountainous, winding canyons where he used to ride his road bike with David. As we passed the old Newhall CHP Office he said, “That’s where it all began.” Fred started his career at that office in October, 1982.

He relived the time he nearly wrecked his Mustang patrol car when he took and off ramp way to fast while chasing a motorcycle. He has seriously had his 9 lives and then some. Just based on the stories he has told me, I give him at least 19 lives by now. 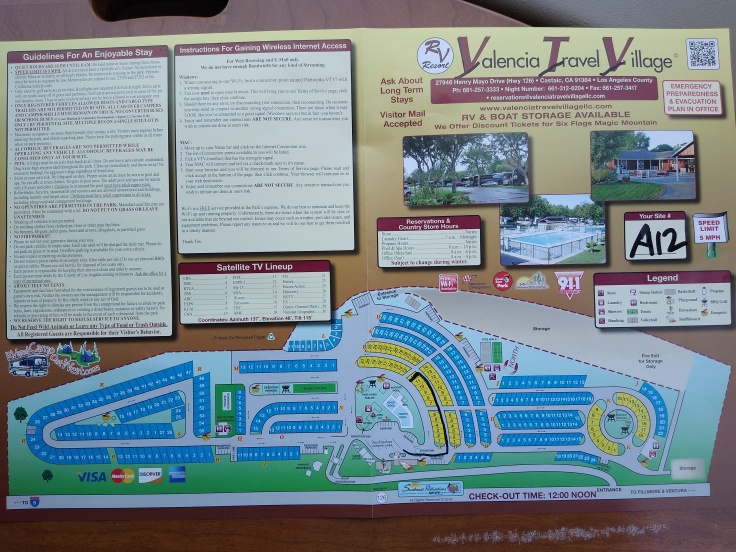 We rolled into the RV park around 1 pm. We drove straight through, skipping lunch and rest breaks. Our goal was to go to the In-N-Out near the park once we were all set up.

We tag teamed the set up so we could get to lunch as quickly as possible. However, when we got to the In-N-Out, the line was ridiculous! I was a smidge irritated that I waited so long for lunch and would have to wait even longer in this clustered mess.

As we were waiting to pull into the parking lot, a black sedan two cars behind us drove wrong way and cut off an oncomig car so he could cut in line at the drive-thru. People out here are crazy! This driver did all that death-defying, law-breaking and only beat us by two cars. Moron!

It was a little cold by then, but I was so hungry! It was still tasty. This was our first In-N-Out stop since we left California over 60 days ago. I have missed it.

Ava and Alissa arrived just after we finished our lunch. We chatted for about an hour and then Fred lay down for a little nap. We went over to the playground and played for a bit while Fred rested.

It was a little warm outside so I after about 30 minutes we headed back to the RV and hung out inside.

After Fred woke up, we all chatted for about an hour and then Alissa and Ava headed home. We made plans to meet for lunch Wednesday after Ava’s half-day at school.

After hey left, David called and said he was free to come over again and would be happy to bring some dinner. We were down for that.

I threw in a load of laundry and we watched the season premiere of Animal Kingdom on TNT. We love that show.

David showed up with street tacos about an hour and a half later. The tacos were worth the wait… So was David’s company of course!

David spotted an interesting knot in a tree while we were eating so he grabbed his camera and snapped a few photos. The knot in the tree looked just like a creepy face.

After dinner, David hung out all evening. He and Fred reminisced about their CHP glory days and told crazy stories. The kind of stories you can listen to 18times and still find interesting. They were the kind of stories that make you want to be a cop when you’re a kid. But , nowadays, they are mostly the kind of stories full of things police are not allowed to do anymore 😩… Dirty Harry type things. Like the use of “legal intervention” to stop fleeing vehicles (aka ramming). Some stories were just funny like the one about trying to arrest a drunk ballerina that kept resisting arrest with dance moves.

Fred lights up whenever he tells these stories. It was so great to see him so happy!