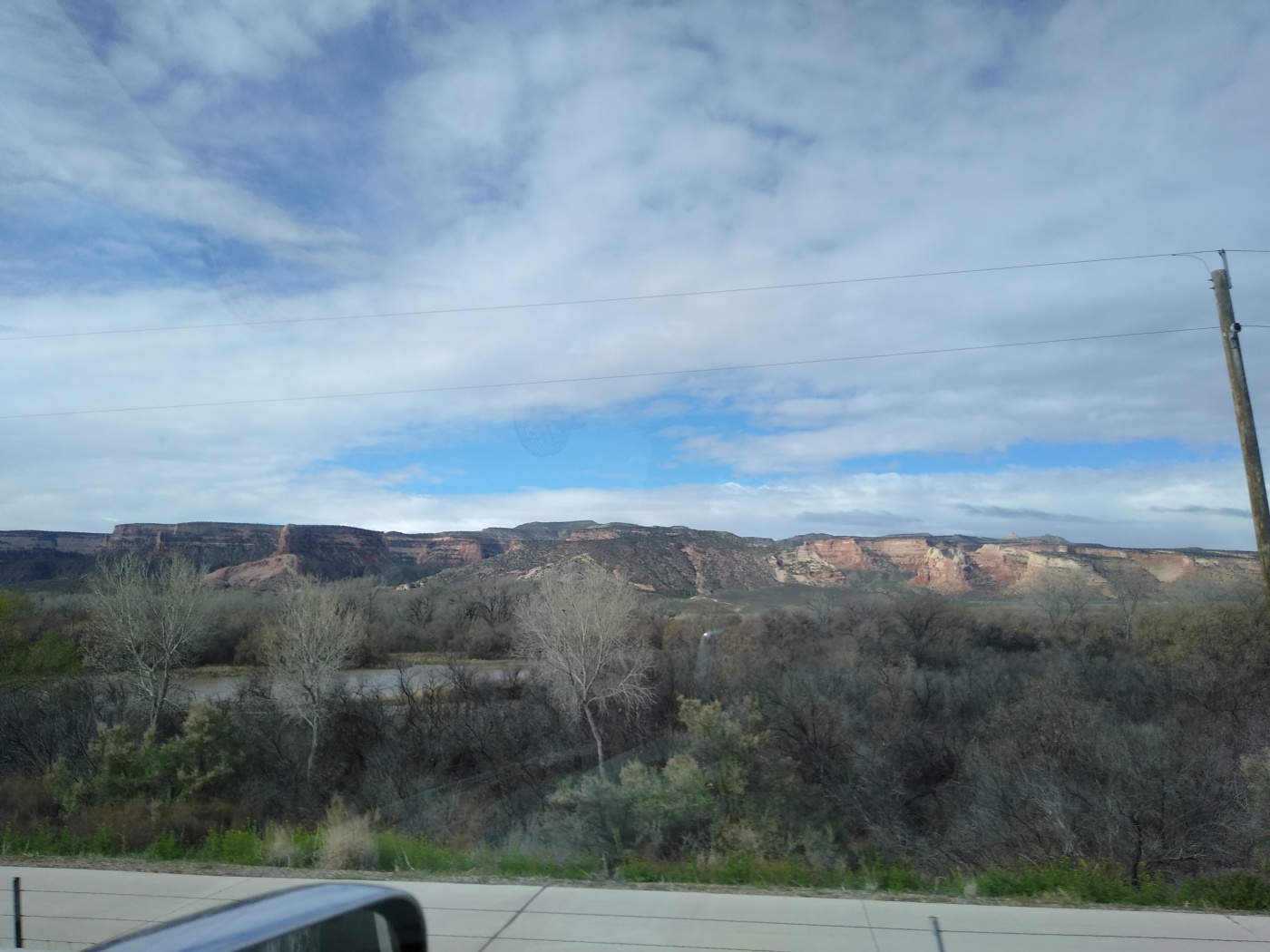 We got up early because Fred was hoping to leave Fruita today. The weather was cold but sunny. We were all packed up and on the road by 10. Fred was confident the blizzard had pushed far enough into the northeast to allow us safe travel over the mountain passes between us and Pueblo, Colorado (our goal destination for the night). 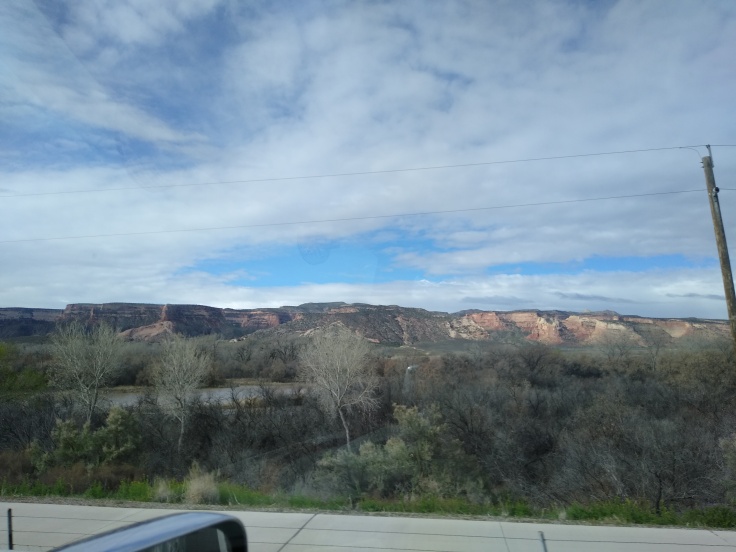 The sunny weather we started with made me believe it too. However, it started snowing about an hour into our drive, near Montrose.

Crossing the mountain pass to Cerro Summit between Montrose and Gunnison made me believe Fred had mislead me about our little trip. It snowed enough to stick to the windshield wipers and the roads were very narrow, bumpy, and lacking gaurdrails in a few key places. Oh, and did I mention, most of the time you’re on a cliff with a deadly drop off. I don’t recommend the 50. It’s very scenic and I’ve said, “Wow,” about 5,000 times while marveling at the sights. But holy crap, it’s rough & scary, at least in a giant top-heavy RV. 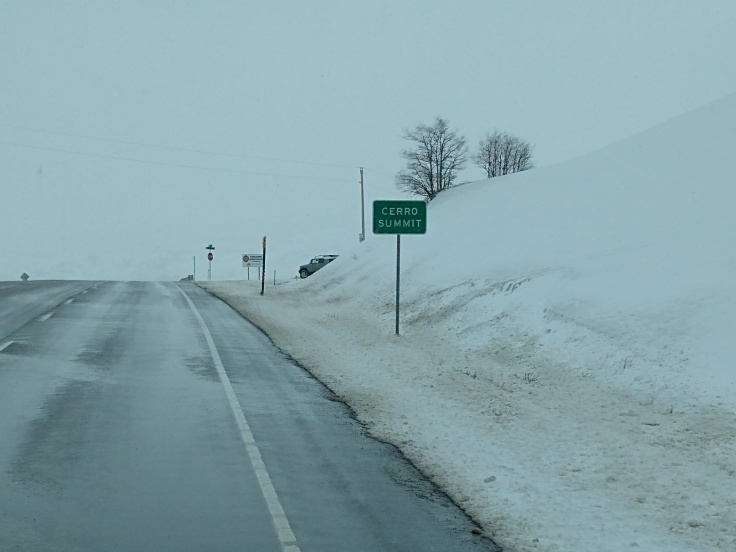 It frazzled the crap out of me! I was holding my breath just waiting to slide over the edge. We made it safely down from that mountain and stopped for some lunch to recover a bit in Gunnison. 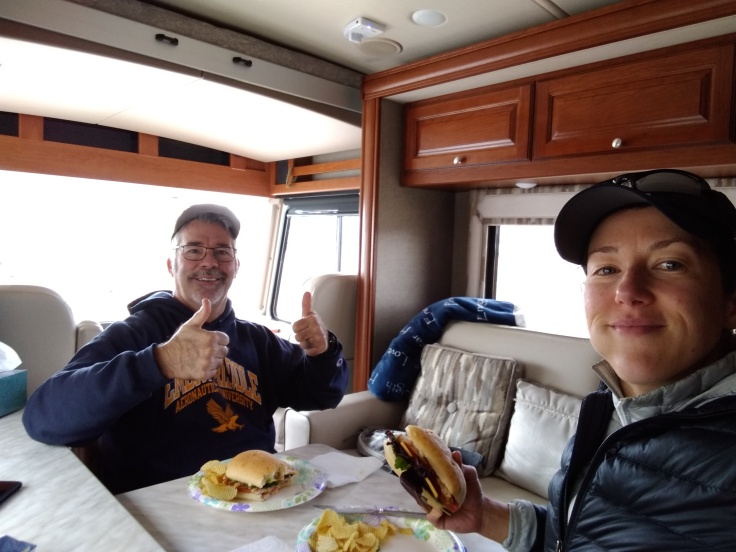 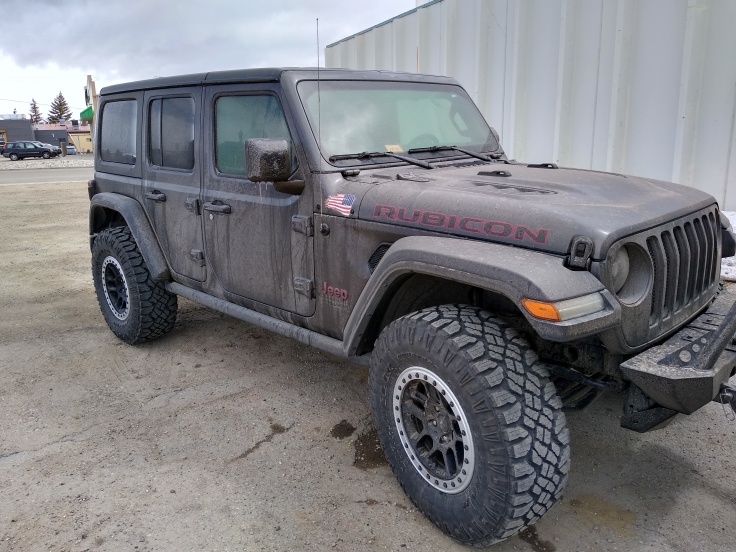 Fred kept telling me it was no big deal and it didn’t drain him at all. I was drained and I was only the passenger! Then he tried to convince me that would be the worst of it for the day…

As we began our accesnt up to Monarch Mountain Pass just west of Silada, we saw a road sign indicating chains may be necessary for commercial vehicles. I looked up the road conditions web page, Cotrip.org. This is what I found:

A traffic camera indicating lots of freaking snow. Fred was confident that the camera footage was probably not updated since the afternoon sun warmed up the mountain. Nope…the snow had thinned but it was still there.

I Googled Monarch Pass and began a milage countdown to the summit. It’s was about 7miles to the top. I got more and more nervous as it ticked down and the snow got heavier. It got rough during the last mile or so. 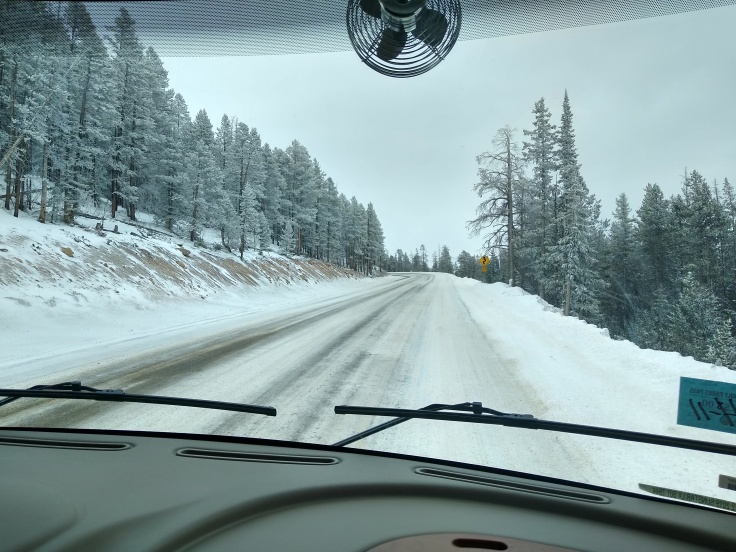 Fred’s philosophy on the day, “We will drive slow…and if it gets too bad, we’ll pull over.” I say, “Ice doesn’t care if you’re driving slow. & We’re on a cliff, where are we going to pull over?” 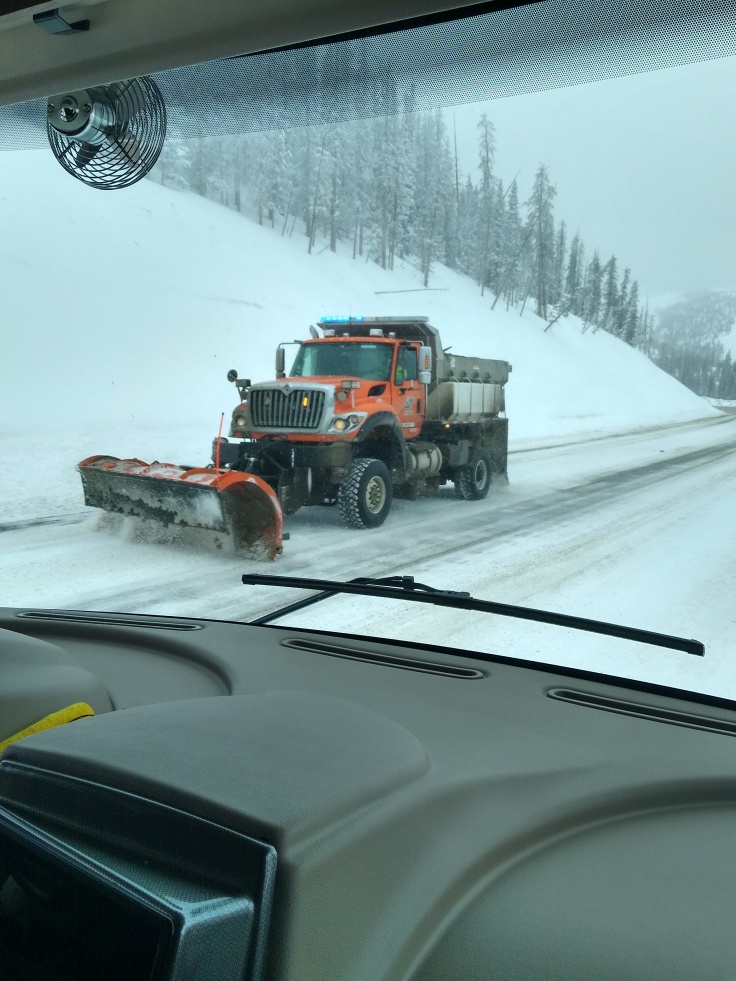 We made it down safe and sound, and totally drained. And I was a wee bit pissed that we attempted this route today. It took me a bit to simmer down from that experience. Fred, of course, was super chill about the drive and confused as to why I was so short with him.

As soon as we were down the mountain the sun was shining and the scenary was gorgeous again. The jeep was about 40X dirtier than before. 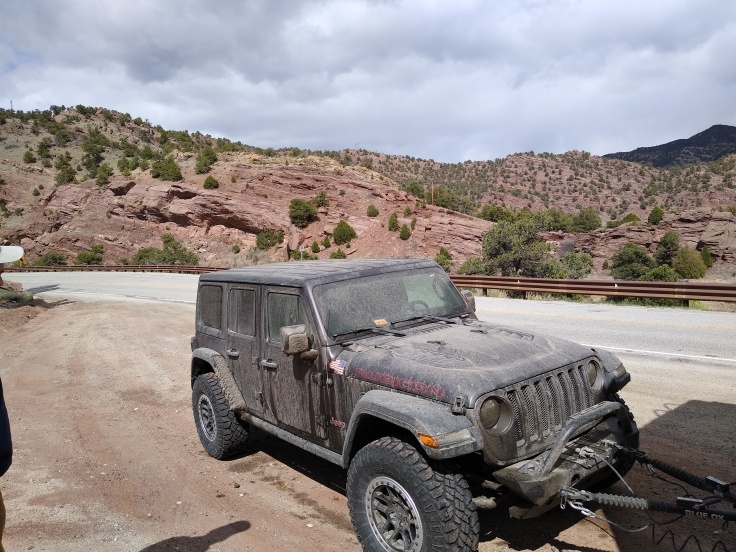 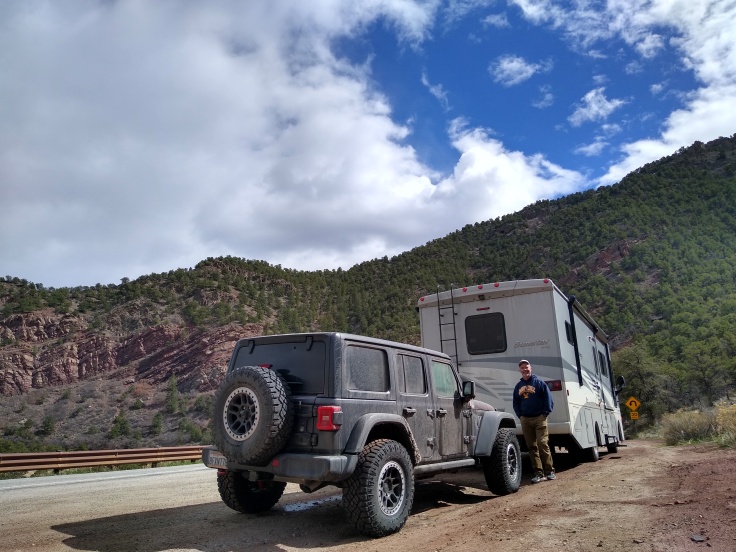 We took a little bathroom break and then plotted a course to Pueblo, Colorado. We found a campsite at a State Park and got a spot for the night. The state parks website sucks but the camp hostess recommended the RVamerica App. That baby worked like a charm. We had to refill our fresh water tank again (at a broken hose bib – so Fred got soaked). We unhooked the Jeep (washed the filthy widows), and headed into town for dinner. Pueblo has a cool River Walk area in their downtown. We ate spaghetti and meatballs at Angelo’s Pizza Parlor (we consider ourselves meatball connoisseurs and never pass them up). 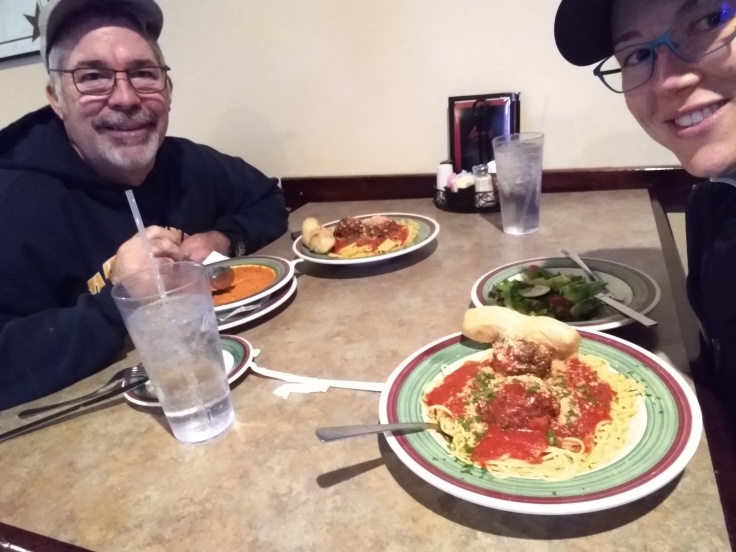 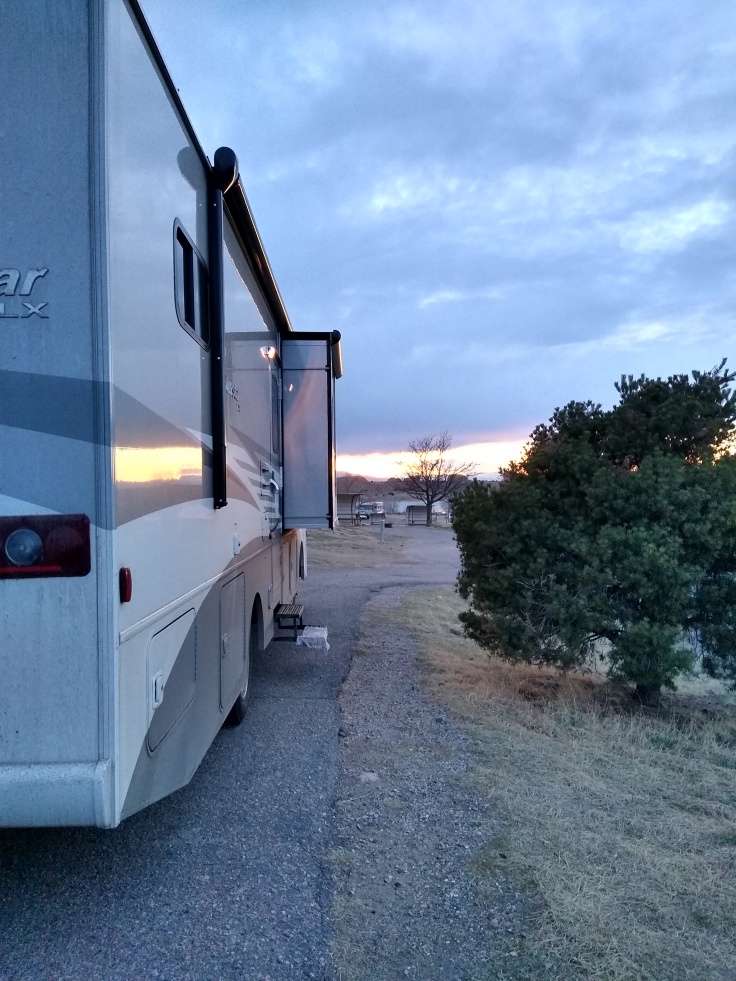 I found the day grueling and long. And not at all what I had anticipated. I’m sure we will both sleep well tonight.