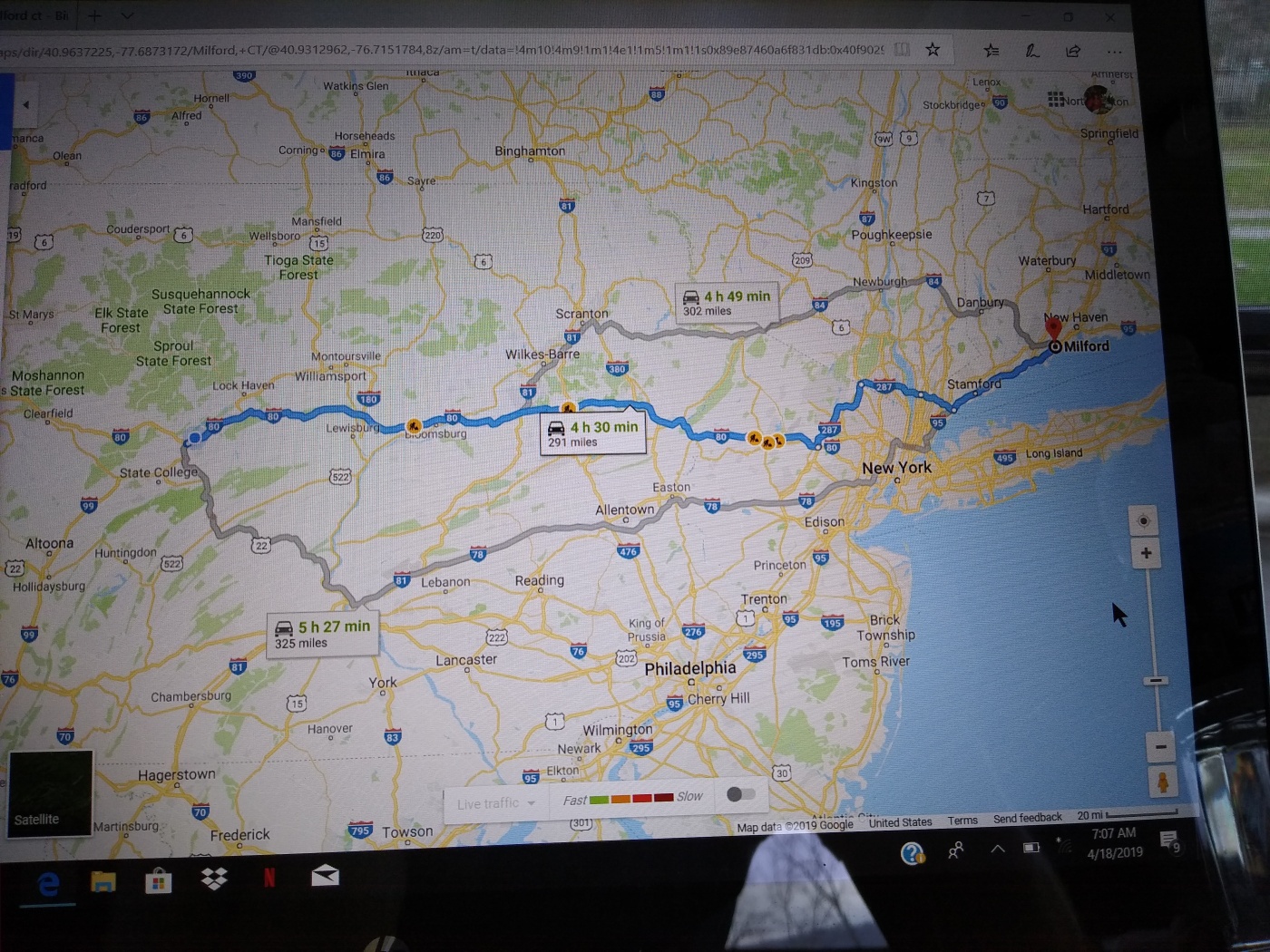 We had lofty goals today…but we slept in until 8:30am. And then puttered out along the way. 14 days on the road wears you down I guess.

After breakfast we mapped out a route that was halfway between Bellefonte, PA and Harwich, MA.

That came out to Milford, Connecticut at 291 miles. 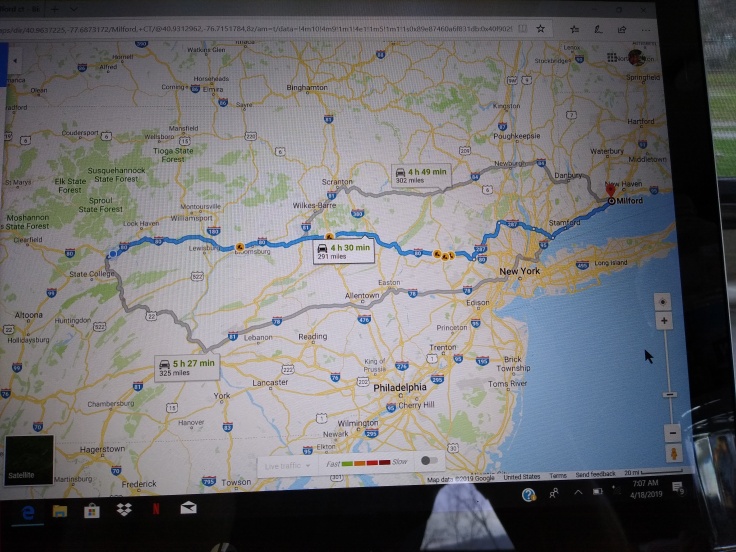 As we packed up camp and hit the road, I began Googling campsites near Milford, CT. Finding camps on the east coast is difficult. Most places don’t open until after Easter weekend and what was open had Yelp reviews indicating they were shabby, full-time tailer parks inhabited by leering chain smokers.

It was stressing me out trying to cross reference multiple camping sites and Google Maps to plot routes, and read reviews…all on my cell phone while rattling down the road in our magical mystery bus.

So I did something I thought I would never do. I opened up that big fat Good Sam phone book that we got for free when we bought our RV from Camping World. (“Retail price $10” – That I scoffed at and said, “Who would pay $10 for that.) I would pay $10 after today. I used it and the KOA 2019 campsite guide and a giant US Atlas. 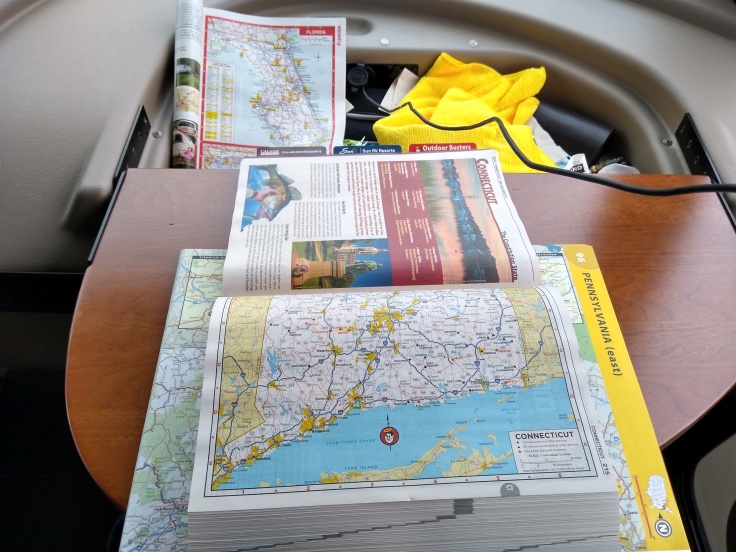 There were sites in those old-fashioned pages that were not on the internet. It blew my mind to go back in time like this…and find it easier than using my cell phone. The books still kept bouncing off the dashboard, but I was making progress.

About one hour into our drive we spotted a “Friendly’s,” an east coast ice cream parlor/restaurant that unleashes all kinds of nostalgia goodness inside Fred. They are getting hard to find so we jumped at the chance to stop at one. Fred loves the Coffee Fribbles. (It’s like a coffee milkshake.) Fred won’t drink coffee but he loves these. So of course, he got one! And a bowl of clam chowder to complete this attempt for the taste of home. 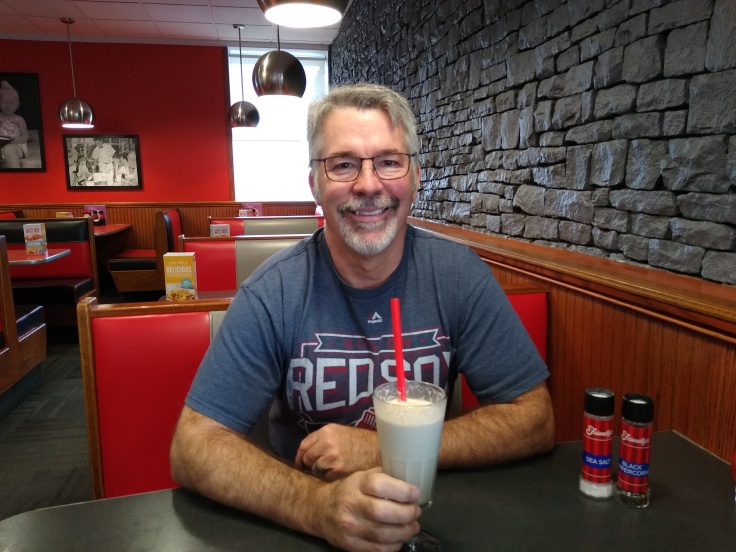 The Fribbles hit the spot, but the chowder was lacking that true east coast taste of the ocean that Fred remembers from home.

I had a hamburger with Mac & Cheese on it. It reminded me of the Academy Chilli-Mac. I always liked the Chilli-Mac. (Except it was always scolding hot and you only had 2 minutes to east it).

About 30 minutes after lunch we stopped for gas and then an hour after that we stopped at a rest stop for a bathroom break. Driving was just grueling today so I think we kept finding reasons to stop.

While at the rest stop we decided to tap out for the day and find a new destination campsite. I used my nifty new books to find a place. Oddly enough, the closest open campsite was in Milford, PA. So we technically did make it to Milford, just the wrong state 🙂

Its a basic camping spot. It would be awesome in the summer. They run rafting trips out of this place, but that part is not open yet.

We set up camp and called it a “recovery day.” We BBQ’d some chicken & zucchini & steamed some rice (in our awesome wedding present rice cooker from Pam & Melissa). Then, of course, we baked some cookies and streamed the Survivor & Amazing Race episodes we missed last night. 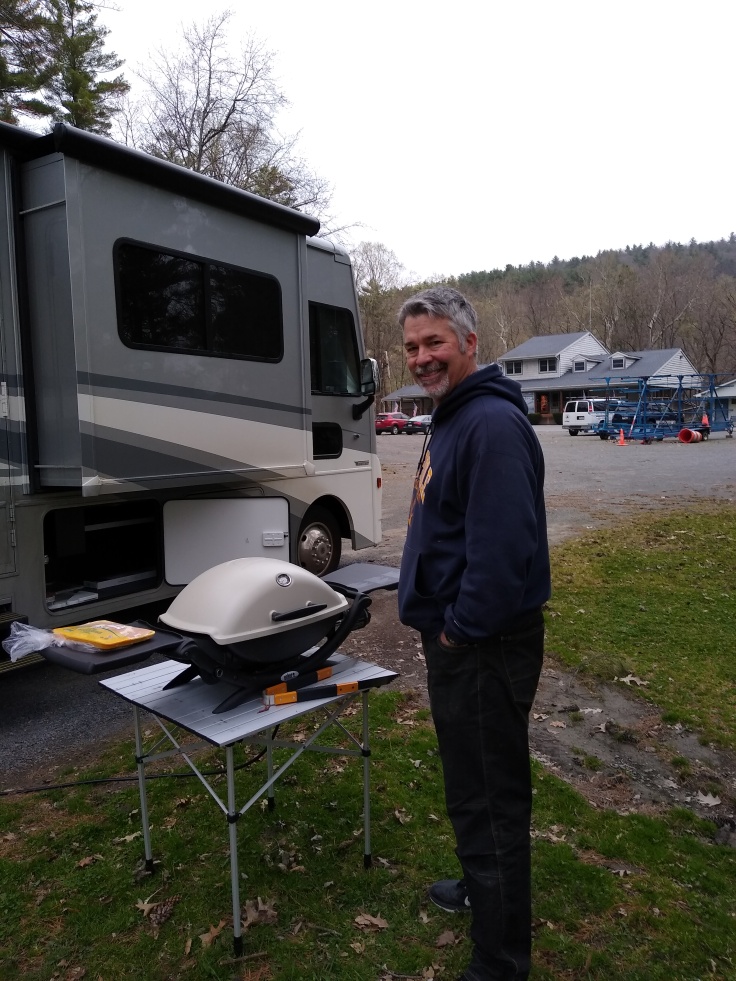 So I would still call it an awesome day! 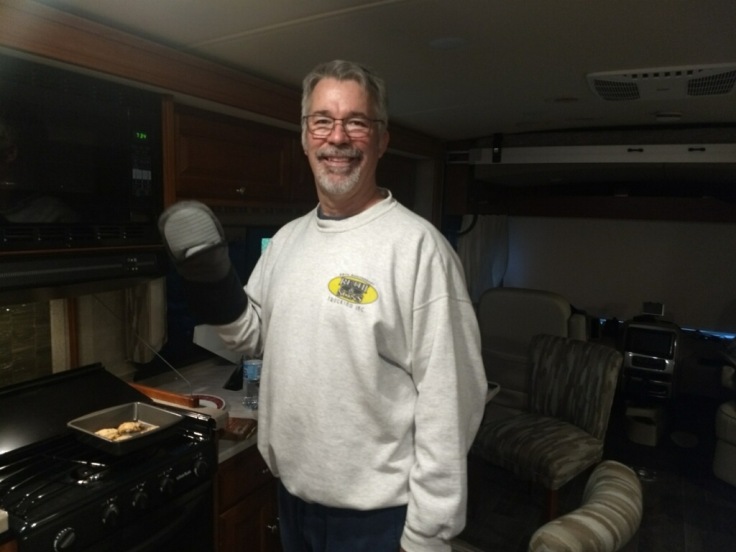 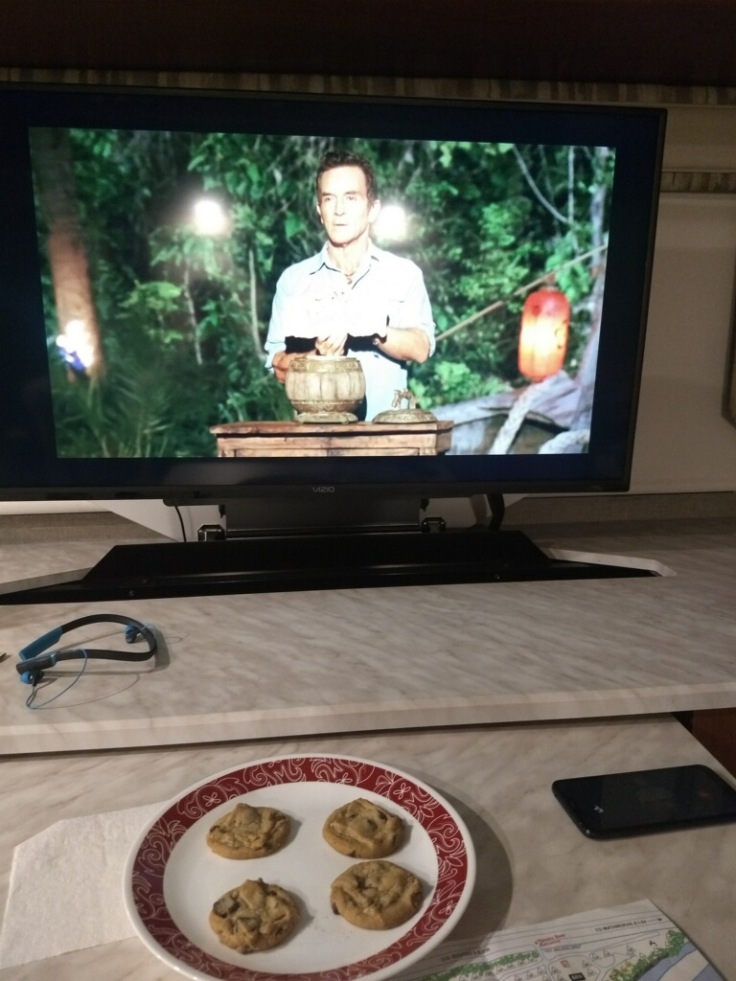 Tommorow, who knows, maybe we will make it to Harwich, MA. It would be a tough push. We’ll see.

Learning my limits is difficult and a little frustrating for me. I want to be the cyborg I used to be but it is not happening. I think we can make mom’s tomorrow if I get some good rest. Wish us luck. Good night. Every day is a gift.