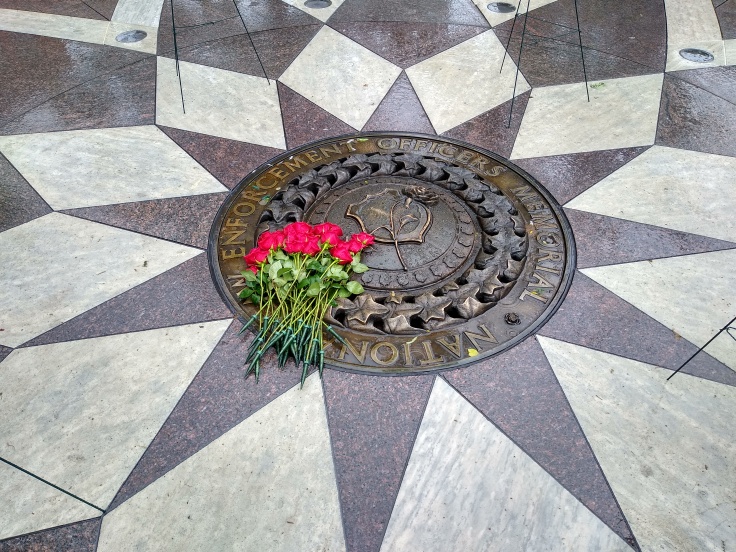 Monday, May 13: Today we got up early because we were excited to go into Washington DC and visit the Police Officer’s Memorial. This whole week is National Police Week.

A little history on the week:
In 1962, President John F. Kennedy signed a proclamation which designated May 15 as Peace Officers Memorial Day and the week in which that date falls as Police Week. Currently, tens of thousands of law enforcement officers from around the world converge on Washington, DC to participate in a number of planned events which honor those that have paid the ultimate sacrifice. Visit this website for more info if you’re curious:
http://www.policeweek.org

My friend and co-worker CHP Officer Kirk Griess, ID #15810, was killed last year on August 10, 2018 while on a traffic stop. The entire Solano CHP office (where we worked) was going to try and go to Police Week to honor Kirk and visit his name on the memorial wall. Fred and I tried to plan our trip so that we would pass through the DC area during Police Week and we could meet up with folks from Solano CHP and celebrate Kirk together.

I ended up getting retired shortly after Kirk was killed and I lost touch with the office as most retirees do. I didn’t keep up with the trip planning so I was out of the loop.

I texted a few guys from the office early Monday morning and tried to figure out what the plans were. But I found out I would’ve had to sign up for everything online ahead of time. Even though that was disappointing Fred and I were still going to go and visit the wall and do our own thing. Fred has several friends on the wall as well who’s names he wanted to see.

Mike and Marey had gone to work by the time we got up so we had breakfast with Vanessa in the main house. I used the microwave in the new kitchen. It’s a powerful microwave/convection oven. I tried to cook a bowl of oatmeal in this powerful machine. It exploded all over all the place. So after I cleaned up that mess, I decided to make myself and few over easy eggs and toaster waffles instead and give what oatmeal was left in the bowl to Fred 😋.

Mike came home early to go to DC with us. We left Aaround 11am. Steven volunteered to drop us off at the metro station and Mike showed us the ropes of navigating DC transit. 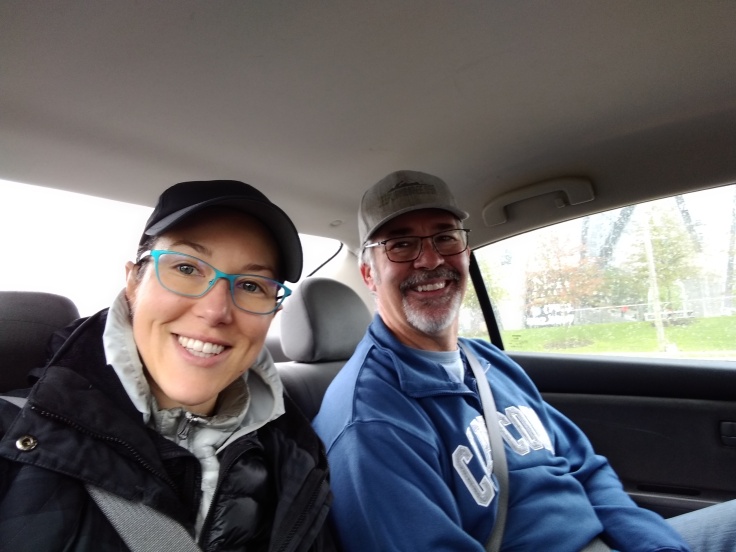 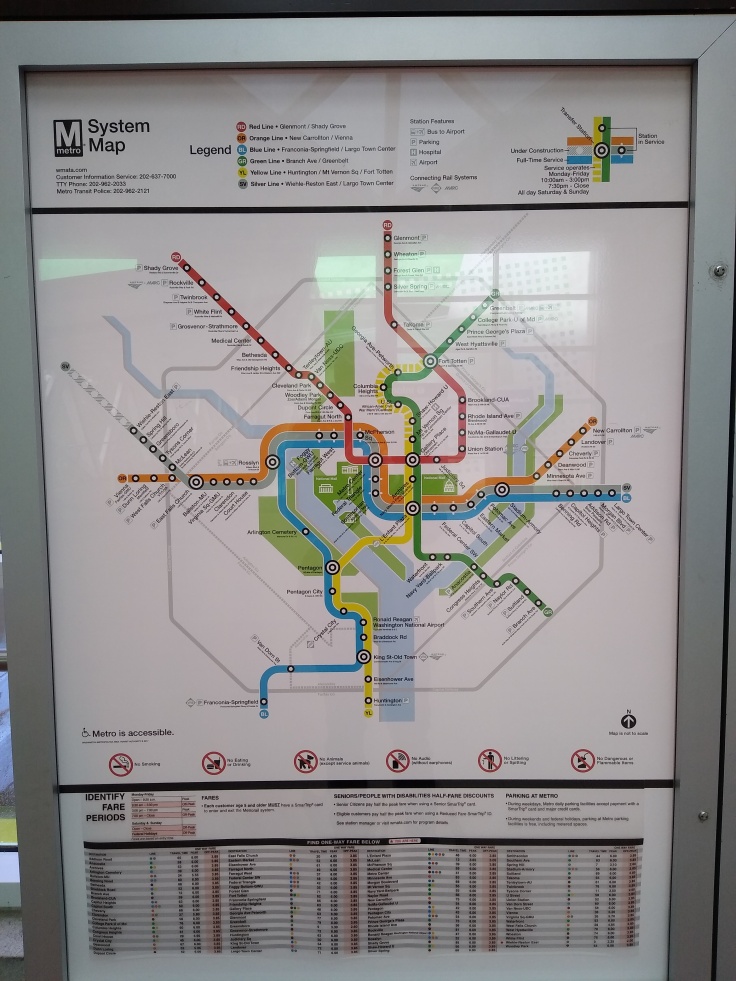 So it’s a bit of an adventure to get from the Weihle-Reston station, where we started at 11:15am, to Judiciary Station, where we ended at 12:28pm. That station drops you exactly beneath the Memorial and you take an escalator up to the front of Memorial.

We changed trains from the Silver to the Red at Metro Station but never waited long for a train. With Mike guiding us, it was smooth and painless. It reminded me of being on the Amazing Race TV show when everything goes your way.

All the people around DC walk so fast and have this intense sense of urgency about them. I guess I have finally slowed down and become one of those retired people that’s always in somebody’s way. It’s almost funny to step back and watch the hustle when you don’t have to be anywhere on a schedule.

It’s interesting to look at life from this new perspective. I’ve really been working on “enjoying the moment” and taking my time to pay attention to the important people and things around me. Before this trip, I was always incredibly anxious and annoyed in public settings, and I was always rushing to get things done as soon as humanly possible. As long as I take a breath and avoid getting sucked into that frantic hustle-mode, I do feel better.

Riding the subway is new to me. I’ve done it a few times before, but I still marvel at being so far under ground and the amount of genius it took to design these kinds of structures. There was even wifi and cell service in the tunnels. How crazy is that. I kept imagining the signal bouncing off the vaulted ceilings and concrete walls like tiny lazer beams passing through and around all the people. I figure someday soon scientist will find out if indeed these transmissions are really harmless beams of information like the AT&T and Verizon claim.

I felt like I was standing in line for Space Mountain at Disney World! 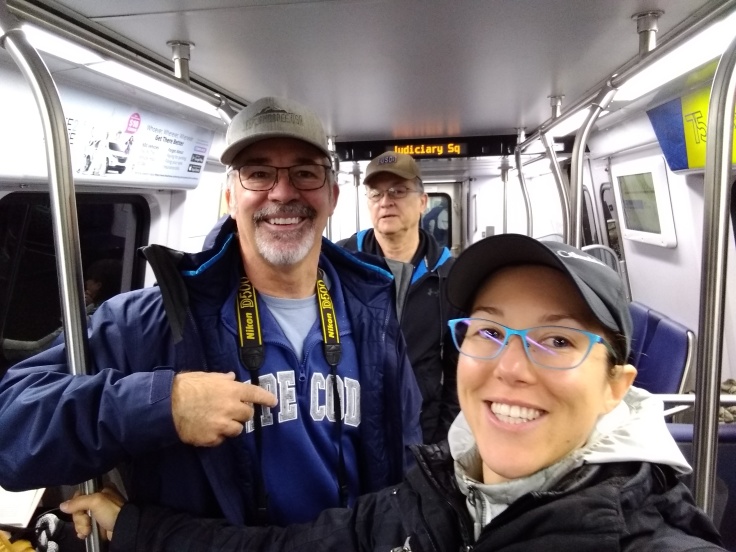 The architecture was so grand and so beautiful. I kept looking up in amazement. It reminded me of the Ninja Turtles. Aside from it being super stuffy and hot underground, I could imagine living down here like my green childhood heros. 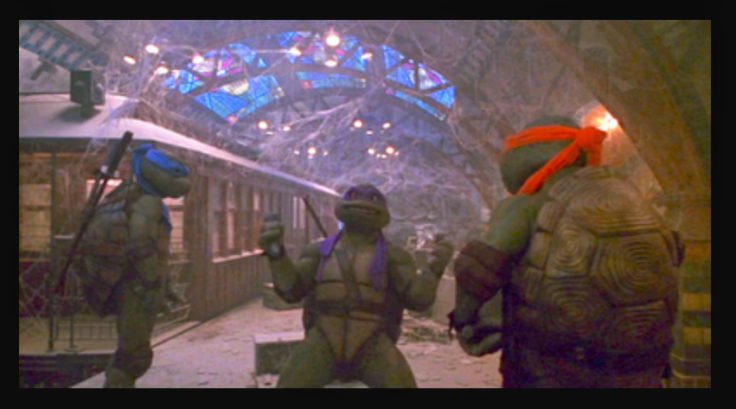 My legs got weak feeling and tight as we rode the escalator up to the Memorial. As we reached ground level, and all the cops came into view, I felt overcome with emotion. Fred did too. The look on everyone’s face was either super serious or mournful.

It was raining but an honor guard was lining up in front of the Memorial, ready to guide a widow and her family to a newly scribed name on the wall. Fred and I were both filled with pride at this sight. That men and women are willing to press and polish their expensive wool uniforms and then stand in the rain to show thier respect and reverance for a fallen officer.

We looked up Kirk’s name on the master list and found his spot on the wall. I wanted to do a pencil rubbing of the stone but it was so soaking wet it didn’t work.

We were surprised and delighted when we found the motorcycle gas tank donated from the Solano CHP office signed by all the officers. It was beautiful. 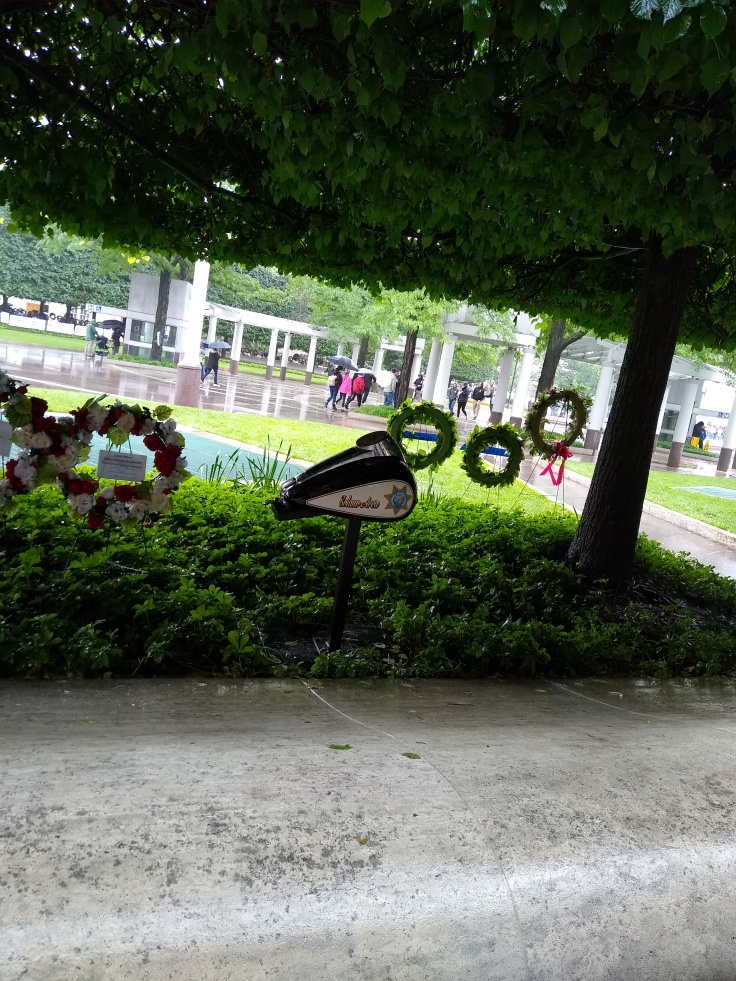 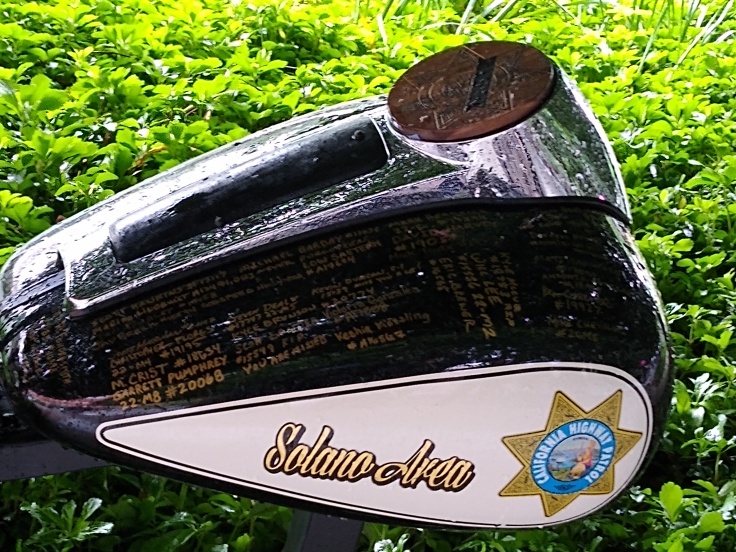 Fred and I were both overcome with emotion several times while moving through the crowds. We wandered for a bit, paying our respects and taking in all the sights and feelings they stirred up. We were going to top off the visit by going to the museum located just across the street. But we found out at the door, tickets had to be purchased in advance online and they were sold out. 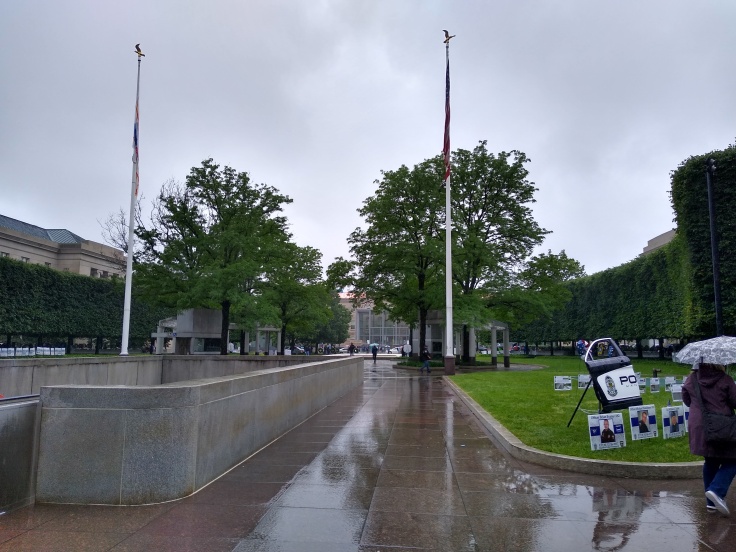 So a note of warning for anyone looking to visit in the future. Plan your trip ahead if time. We decided to grab some lunch and then head back home to get out of the rain and beat commute.

We Googled nearby restaurants and found the Chop House Brewery a few blocks away. The place was packed full of cops. We waited about 25 minutes for a table. So I went a few doors down to a coffee shop to grab a few pastries to tide us over until we were seated.

This brewery was awesome and jazz themed. There was an elevator to the bathrooms and a vault. We sat next to a table of cops from Canada.

Most of the cops we saw where dressed in civilian clothes but we’re displaying their badges on chains around their necks. The badges were adorned with a black tribute of morning ribbon across them. There was a cop we saw dressed this way with a little boy in tow. The boy was his clone. He even had a little toy badge around his neck with a morning ribbon. It was both sad and uplifting. We all know that kids we be a cop when he grows up.

The brewery was selling a beer and pint glass with the proceeds going to the Memorial. So of course we bought one. 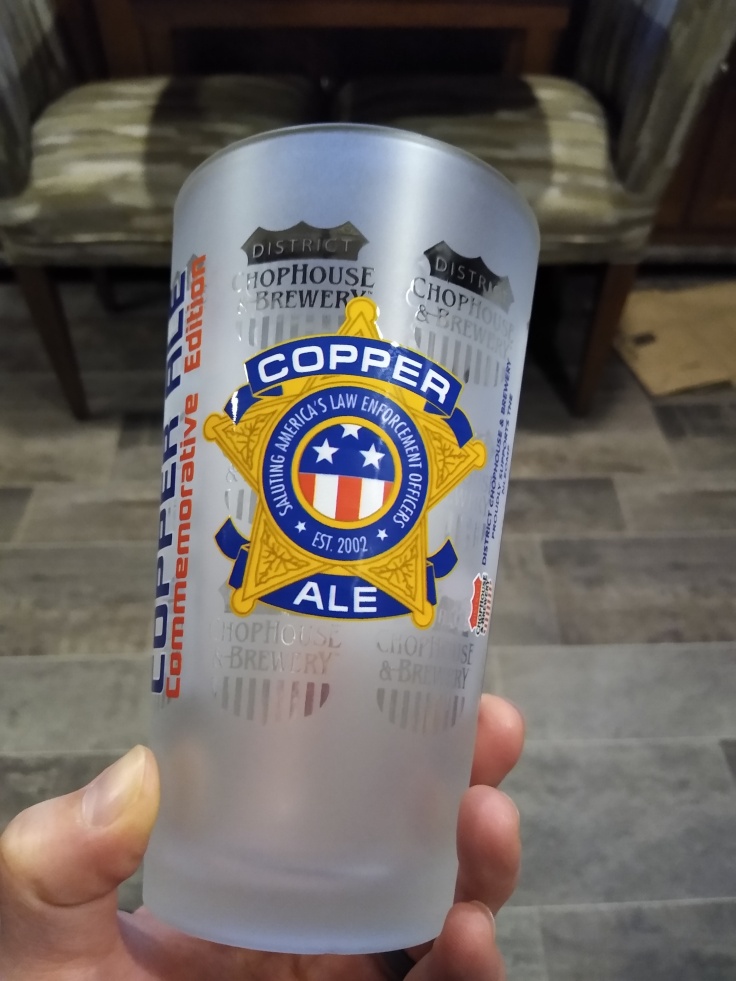 After lunch we went back through the Memorial. It had stopped raining and the LAPD Band (Los Angelos Police Department) was playing. The music was cop-themed tunes like the Drag Net theme song. We stopped for a while to listen. It helped lighten the mood of the day.

Commute on the trains starts at 3:30pm so we headed back down the escalators to go back home. The people in the station were walking even faster now than before and had a much more desperate sense of urgency. That makes sense though. Getting home should be more important than getting to work.

There wasn’t enough seats for Mike to sit on the train. So he stood nearly all the way back home. It was a very somber ride back. Fred may have napped a few minutes.

Steven picked us up at the metro station again and took us home. Fred stretched out in the RV when we got back. I went for a long nature walk. A red fox followed me for a while along my path. 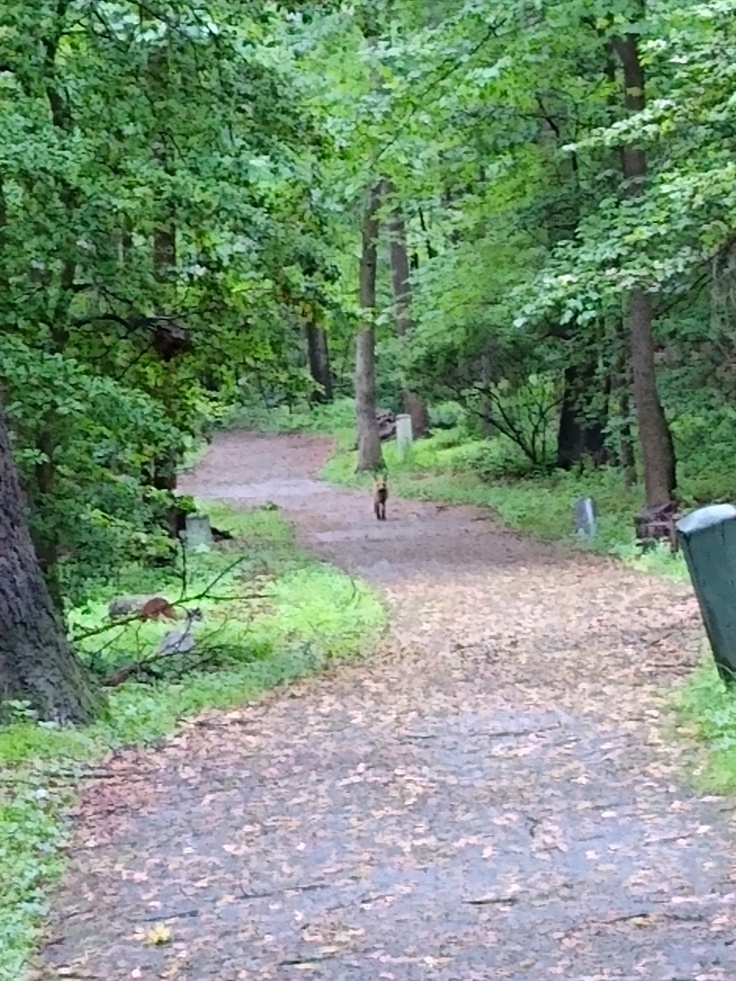 We all did our own thing for dinner. Fred has really been digging chicken flavored Top Ramen lately. It feels good in his belly. That’s all that matters. It’s odd that the foods with the least amount of nurtrition are the ones that treat his digestive system the best.

We hit the grocery store in the evening to stock up for our journey onward. We decided Tuesday would be our departure date. We are hoping to get down to Florida to see my brother while he is home between military deployments and training.

It’s sad to leave family. But it has been a truly great visit! This time at Mike and Marey’s has been the most relaxed I’ve been in months.